With a franchise like Star Wars, it’s difficult to even speak about it without angering some fans. A world that has grown up with these movies for the past few generations is sensitive. Even mentioning some movies can make certain fans upset. So whenever I start to bring out the big conversational guns, EVERYONE is packing heat. When it comes to the larger implications of Disney owning Star Wars… it’s complicated, to say the least. But that’s what we’re talking about so let’s all put down the blasters and discuss. Now that everyone’s gotten their itchy trigger fingers back in their pockets…

The Star Wars Franchise and the Future

So, the biggest problem with making more Star Wars movies has always been the same: fans. With a literal globe of fans, EVERYONE has their own opinion. Not just on each character, their motivations, and actions. I’m talking about literally EVERYTHING from what outfit color Rey should wear to ‘Why is Rey even here?!’. Not that I don’t like the new movies personally, I rather enjoyed taking my kids to see them. But the fandom at large has been mostly bitter and angry as of late. I’m not going to be the one to say it’s because we’re confused…

But we ARE confused though…

You see, back when the prequel trilogy came out (Episodes I, II, and III), Star Wars fans divided into two groups. Half of us were happy to see NEW Star Wars stories, thrilled to meet new characters, go to new planets. But the other half was so angry that these stories weren’t already familiar. The other half just wanted Star Wars to be the same as it had when they first saw it. Now, I’m not even getting into the nitty-gritty, mind you. This isn’t even addressing the chaotic arguments created by the ‘Special Edition’ releases. No, we’re just dealing with the problems that more movies have created.

Now, instead of having a unified group of Star Wars fans getting behind every new movie, it was different. There wasn’t just a challenge to overcome for every movie, it was a downright battle. Each new addition to the Star Wars story garnered new angry responses from the bitter half. The people who had grown up with a VERY different Star Wars. But the larger issue was, Star Wars wasn’t being made for the same audience. The audience had grown from a hopeful parking lot full of people to a significant part of the world. Everyone has an opinion, and almost nobody could agree on… well, anything.

At this point, when the fandom was divided pretty heavily, is when more plans were made. Not only would they make more movies, they were going for a whole new trilogy. Now, as a man who has literally bled for these movies (re: tattoos), I was excited. The first film I ever saw in theaters was Return of the Jedi. So taking MY kids to see new Star Wars movies was going to complete a lifelong goal. Then, as news started to trickle in about what they would be about… so did the complaints.

Now, I was ready for some of this, I was pretty young when the prequels were released, but I remembered. There were going to be older fans who didn’t appreciate the differences. But then, I gave J.J. Abrams’ first entry a chance.

A highpoint in my life was taking my wife and kids to our first Star Wars movie as a family. We had an absolute BLAST and explaining to my kids about the movie was so much fun! Even with the highly emotional death of Spoilers, I still thoroughly enjoyed it.

But, then I let it sit for a while, tried to bask in the glow of another glorious narrative. Now, my wife will tell you, at times I’m a hopeless optimist. Add to that the fact that I always WANT Star Wars to be amazing and there’s a recipe for miscalculation. So I let the story sink in, saw a couple of YouTube analysis videos.

Then, after the glitz and glamour of that magical moment wore off… I saw it. The YouTube videos were right, THIS movie was just a mirror of A New Hope. Not only did it become obvious at this point, I was almost mad at myself for not seeing it.

But the Show Must Go On… Right?

With Disney in control, more movies on the way, and my kids still on board… it got complicated. I was now not only sort of doing it for my kids, but I was worried. Was I becoming one of those angry purists that had plagued the prequel trilogy? Doomed to become an angry Reddit poster, trying to ruin other’s good time. So I decided that I would approach the situation with cautious optimism. I wasn’t going to watch any more YouTube breakdowns. I was going to let the movies make me feel whatever way I felt and let that be enough.

But then came The Last Jedi.

Now, trigger warning, because I’m about to unholster an unpopular opinion. I actually really appreciated this one.

How Do You See Luke…?

I know, I know, it wasn’t by far the best movie in the franchise. That wasn’t the point I was trying to make at all. No, for me as a child, my very first look at Luke Skywalker was different. I hadn’t seen the whining farm boy on Tatooine, or the impatient student on Dagobah. My father had skipped right to Return of the Jedi so we could see the re-release in theaters.

This meant that, to me, Luke Skywalker was a different, much darker hero. The first time I saw him, he was dressed in all black head to toe. His face covered with a black hood, part of a cloak that hid his frame. The first things he did were to use his powers to choke guards in his way. Then he used a Jedi Mind Trick to force someone to do his bidding. Sure, this was a dark version of a hero, but to me, that made him a badass. I grew up on Batman, not Superman, so Luke being a dark hero stuck with me.

This means that the EPIC fight scene between Luke and Kylo Ren in this film was AMAZING for me. Not only did Luke TRULY prove he was far and above the best duelist in the galaxy. Luke went out like a goddamned PIMP. And anyone who says anything different, well, we may need to fight about that. Luke Skywalker, basically the savior of the Jedi Order, had become bitter. He had been disillusioned by the fight of good vs evil. He took down one oppressive regime only to see it replaced by another.

It made SO MUCH SENSE that he wasn’t a cheerful little boy about that. I LOVED seeing him as an old man, affected by the weight of his lifetime of struggles. To see his arc go from that to reclaiming his throne as King of the Jedi… WOW. That was truly a great thing for me to be able to see. Not to mention BRILLIANTLY played by Mark Hamill (seriously, that guy is a LEGEND).

Now, that brings us up to the most recent happenings. That is until you consider what Bob Iger, CEO of Disney, had to say recently. 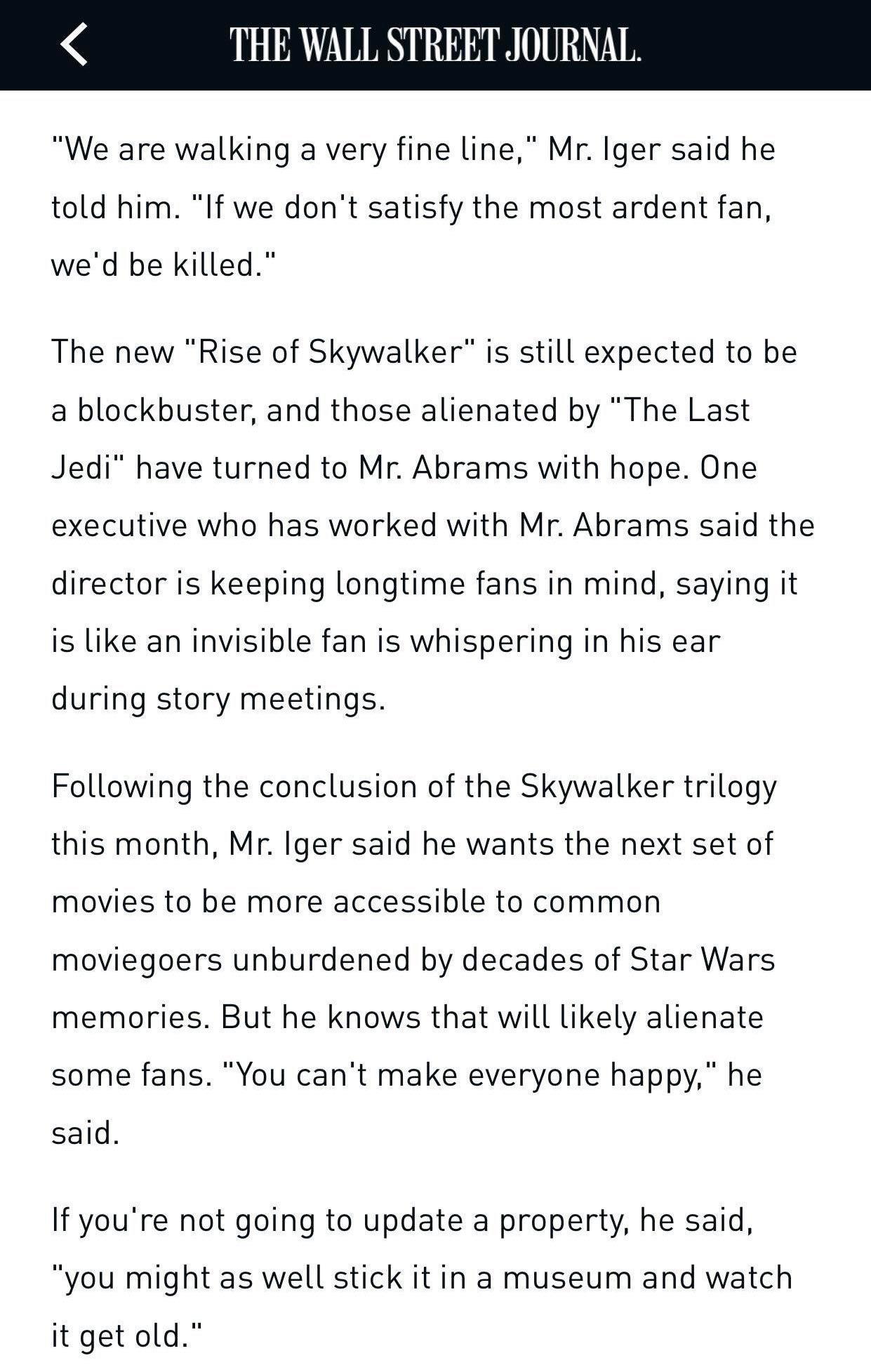 In a statement to The Wallstreet Journal, Iger told us fans what to expect moving forward. Now, this comment wasn’t completely out of left field, things have been moving this way. The real nugget of information that will have people upset is ‘accessibility’. Now, this may not seem like an issue for most, normal people, but I’ll get to the heart of it. There is only really one example in modern culture I can think of that compares.

How Skyrim Did The Same Thing…

One franchise who’s legend has the same pull as Star Wars is The Elder Scrolls. These games have captured a VORACIOUSLY enthusiastic fanbase since their first entry. The developers made a decision, for TES 5: Skyrim, to make it a more accessible game. Overall, this seemed like a brilliant idea.

Simplifying menus and game mechanics to make it easier for casual fans. Now, Skyrim is, by a wide margin, the most successful Elder Scrolls game. More people have played it than any other in the series. That said, it’s also one of the most commonly criticized, ironically for the accessibility.

The plain and simple fact: if you try to make something complex into something simple, people might be upset. When fans get obsessive over any property, they often defend it with lethal intent. Not just arguing with someone, but outright throwing insults instead of debating merit.

All in all, making the Star Wars franchise easier for new fans is a smart move. It means more fans, more money, more movies, and overall a better intellectual property. This also means the most pedantic, obsessive fans will have LOTS to say about it. So, if you’re excited to see the end of the Skywalker Saga, congrats! The time you’ve been waiting for is upon us as of December 20th.

But if you’re one of the angry purists on Reddit to post as many spoilers as possible… WHY? I mean seriously, all of us are just trying to make it to the theater without having something ruined. And yes, I’m serious. If you don’t want the literal script spoiled for you, as a fan, STAY off of Reddit. People are on there putting spoilers in comments, posting them all over non-related Reddit pages.

I even saw a story about one Reddit user who is direct messaging spoilers to random people. My question is, why do these people have so much malice? Why does this New Star Wars vs Old Star Wars have to separate this community? Only Sith deal in absolutes after all.

I guess after all of this, Harvey Dent was right. I’ve seen Star Wars be the hero I wanted it to be, just like the fans. But I’ve also lived long enough to see fans become the villain.