“Hiveswap Act 2” is finally out after a 3-year hiatus. Now that we can finally delve into the second act of a four-part play what can we say about it? Well, it definitely has the charm of the first Act though with a few downgrades. Let’s take a moment to stroll down this otherworldly game and see if it deserves to be culled or praised. Do be warned. Some spoilers ahead. Please finish the game before reading about it here.

Before we begin reviewing “Hiveswap Act 2” it is important to know the circumstances and history behind its release. Hiveswap is based on the webcomic Homestuck which was a mega-hit for a time. It was originally presented as a Kickstarter earning $2.4 million. Originally slated for a 2015 release, problems with the original developers “The Odd-Gentleman” forced it to start from scratch. Eventually, in 2017 the first Act was released on Steam.

It was colorful, it was fun, and it was a love letter to fans of the original webcomic. If you haven’t read it yet you can read it here. Then, fans waited for the next act. For those accustomed to other episodic games, episodes are usually separated by a month. Three years and many controversial incidents later…

So what’s the story? Once again we follow Joey Claire who finds herself transported across space and time. With the help of her new friend Xefros she must explore Alternia, a planet inhabited by children and ruled by a caste system based on blood color. Far from home and with the clock ticking, she must find a way home before Alternia and Earth are both destroyed. 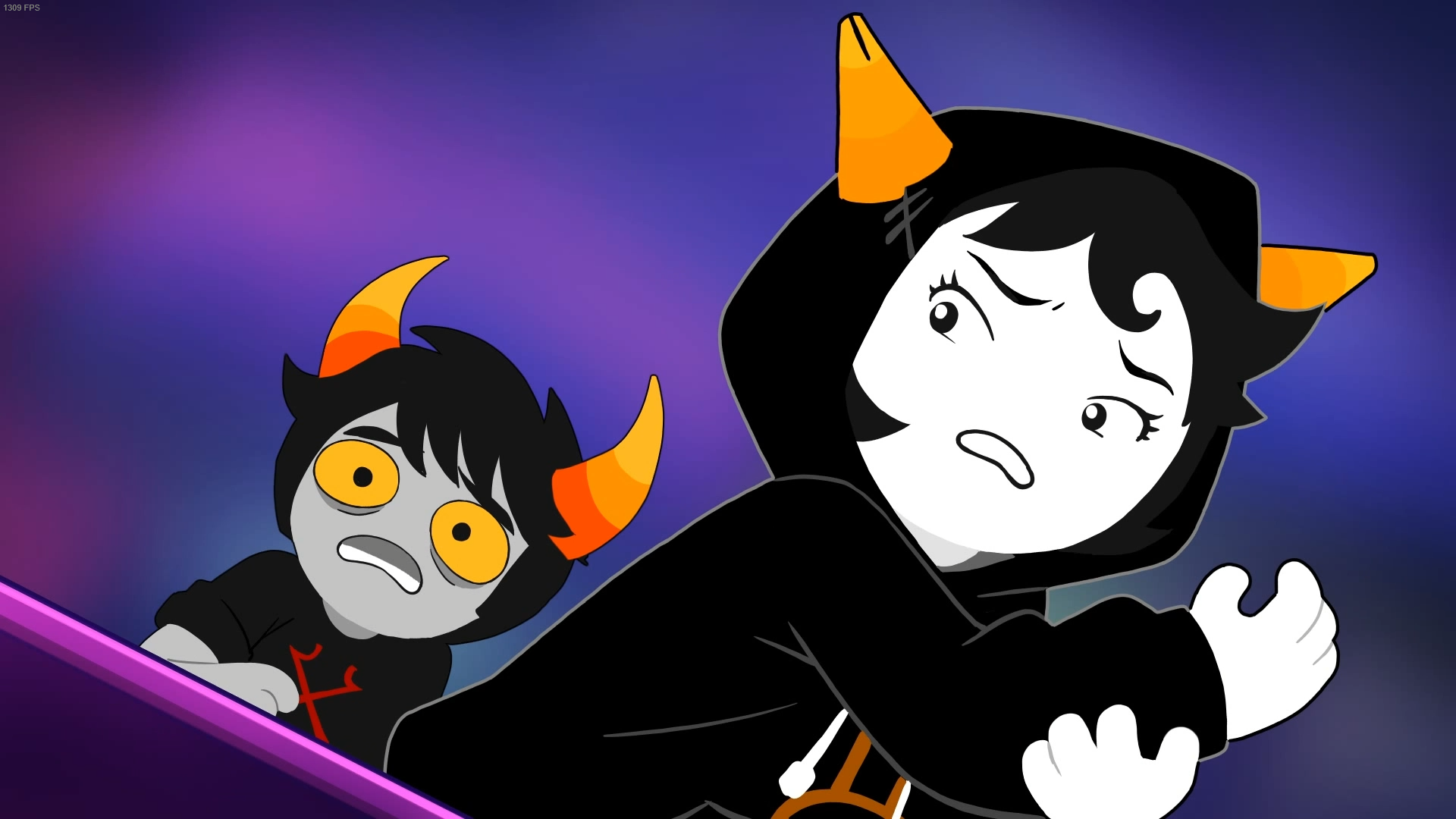 “Hiveswap Act 2” shares the same gameplay as Act 1 with a few tweaks made. Players can explore different areas in segments and interact with things in the background. It is a basic point-and-click title with a little “Ace Attorney” styled twist later on.

One of the highlights of “Hiveswap” is its art style. Everything is really pretty to look at and the world of Alternia is a perfect place to show off how colorful it can be. There’s a really nice Sci-Fi vibe going on from the train station to the train’s interior. “Hiveswap” manages to make Alternia look like a really interesting place to explore and leaves you craving for more scenery. Perhaps in another three or four years when the next act is released, we’ll see more of this gorgeous art. 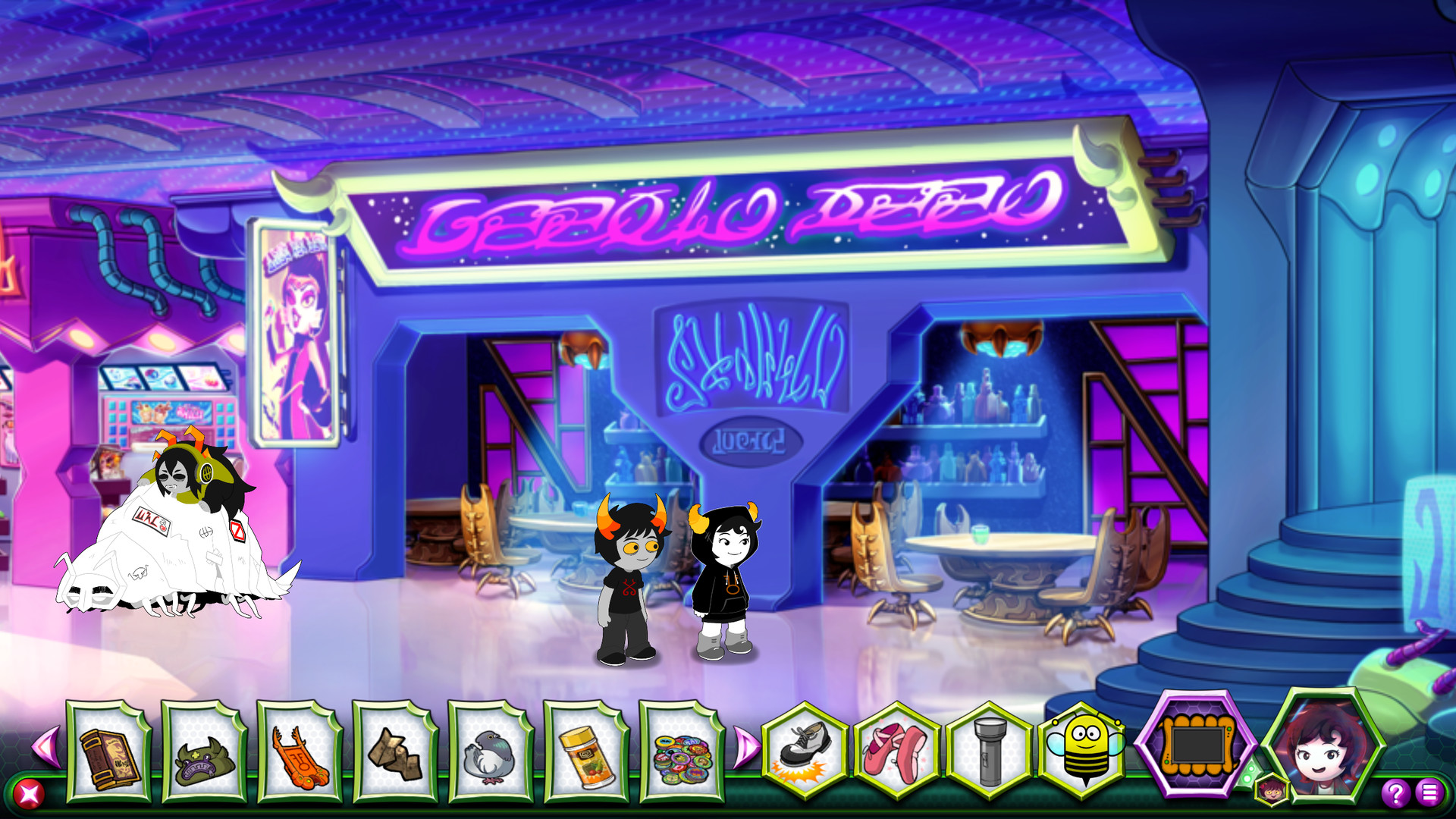 “Homestuck” has gone through a horrible rough patch with its epilogues, Sequel, and spinoff games such as “Hiveswap: Friendsim“. The writing has taken a sharp decline with its unnecessary vulgarity and character breaking scenarios. However, the writing for “Hiveswap” is reminiscent of the glory days.

One of Homestuck’s best attributes was how the characters were written. Personalities were always very different from each other and seeing characters interacting always led to some funny, interesting, and dramatic scenarios. Joey and Xefros are both likable characters and their interactions really boost their comradery. Joey’s optimism and Xefros’ more pessimistic outlook on life give their dialogue a nice little mix. Especially with Joey’s limited knowledge of Troll society. 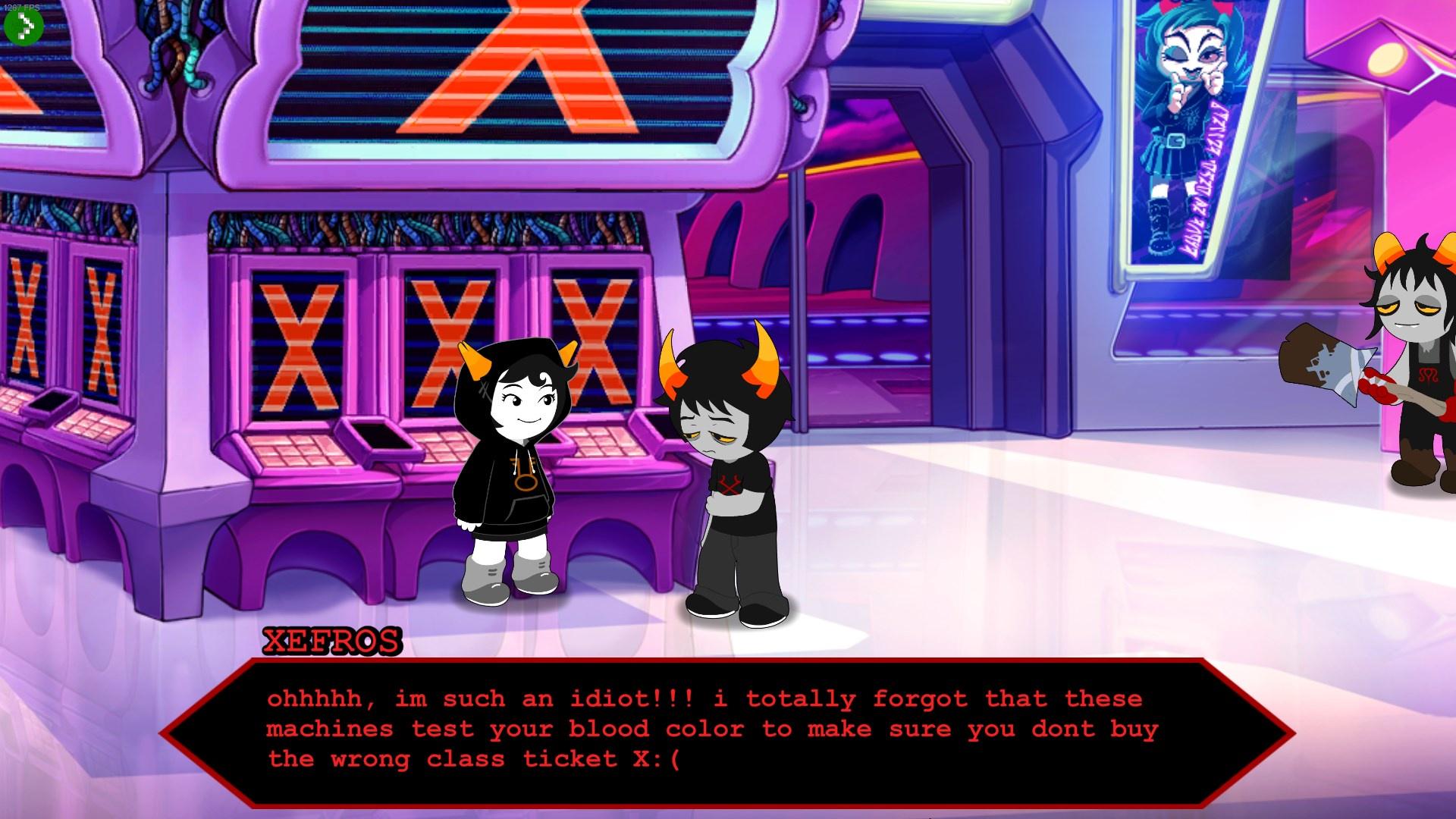 There are plenty of side characters to interact with too. If you’ve played “Friendsim” then you’ve probably met them already. Each Troll has their own blood color and typing quirks which really gives it the old “Homestuck” feel. For those who haven’t read “Homestuck“, “Hiveswap” does a good job of introducing Alternian culture to newcomers.

One of the more polished sections of the game is the Jade Cart. During this segment, we really do see many of the old item collecting mechanics come back into play. You’ll have to collect evidence around the cart and interrogate different trolls to discover who stole a certain book. There are also small moments where you do have to use certain items on objects in order to find hidden objects. Once you’re done collecting the evidence you can start the trial. 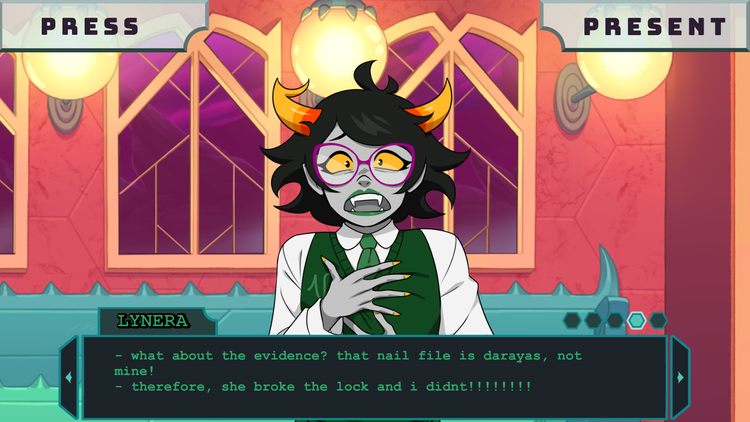 For the most part “Hiveswap Act 2” is a sweet continuation of the First Act and a treat for any “Homestuck” fan. However, the game does have some flaws mostly in comparison to its previous Act.

For starters, item management is heavily toned down. At times players would need to find items in order to make progress. They would also need to combine items in order to solve puzzles. For most of the duration of Act 2, there don’t seem to be any items that can be picked up. You definitely “collect” items. However, they don’t go into your inventory. Therefore, you can’t use the items on characters or other objects. If you imported a save file, you’ll have access to all of your inventory from the first act. However, it isn’t until you are two-thirds of the way through that you’ll be able to collect new items that are actually used and stored in the inventory. 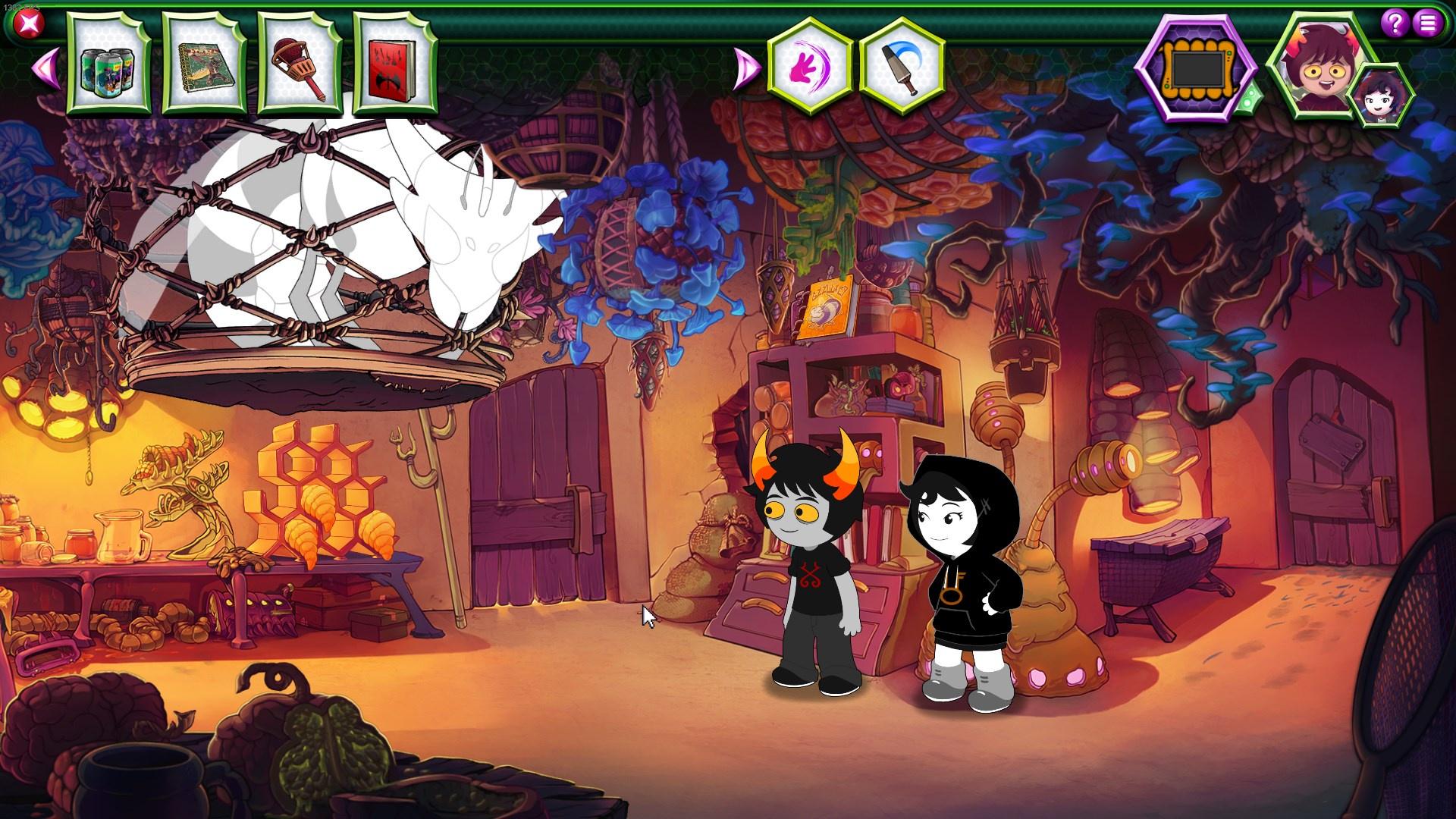 Interaction is also toned down heavily with many repeated text boxes and objects you can’t click on. “Hiveswap Act 1” had plenty of objects to look at. If it looked interesting to the player, it could be interacted with. Using items on objects also gave a unique block of text. It gave players a reason to go explore the area multiple times just to read everything. Act 2 doesn’t seem to go this far.

Unlike the first Act, this second installment seems to have a lack of any real puzzles. Most of the gameplay focuses on character interaction. Rather than exploring a location to collect useful items to progress, “Hiveswap Act 2” takes a slightly more linear approach. Players will mostly have to talk to characters in order to unlock dialogue.

One example would be during the honey farm segment. It’s implied that you need to smell like the forest in order to pass through unharmed by the local wildlife. To any point-and-click veteran, these words would normally imply you need to search for something to slather yourself with. There is even a machine used for pressing fruit into juices in the area. That combined with the hanging fruit in the background would make any player think “I need to get those fruit down somehow”.

Instead, the way to progress forwards isn’t anything clever like that. Just talk with Joey, or Xefros and Joey will suggest looking inside the house. Only then will you be given the option to break into the nearby house using telekinesis. The fruit smashing machine was irrelevant the whole time. 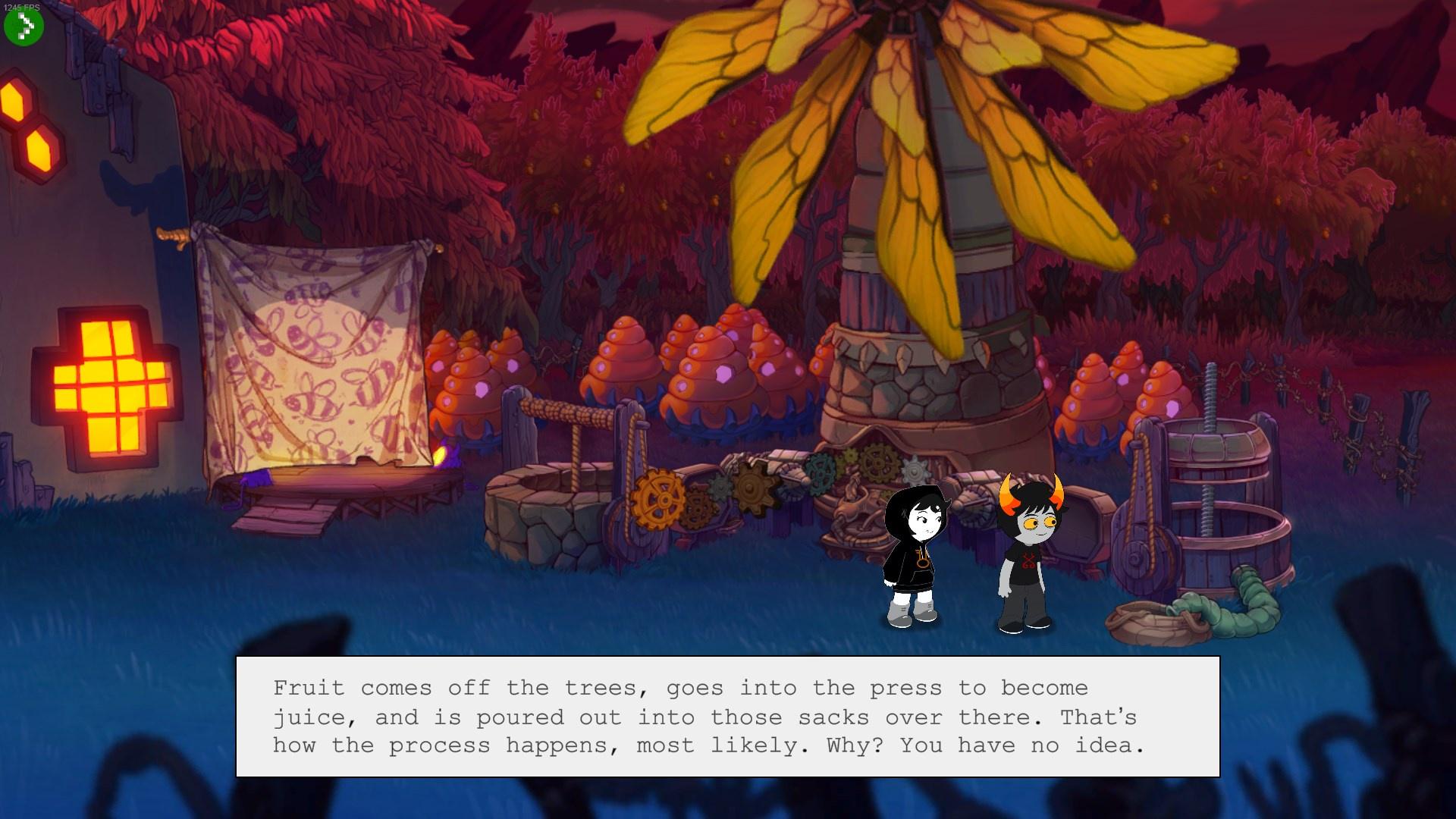 In conclusion, “Hiveswap Act 2” is a fine continuation of the first act. It introduces new story elements and fleshes out the characters and world a bit more. However, it is still unbelievably late to the party as an episodic game and does cut back on a few things that made the first Act so good. I give it a three and a half out of Five. If you enjoy it then great, if you don’t it’s understandable. Hiveswap Act 1 and Act 2 are available on Steam.