Fizzy drinks, pop, soda we call them all sorts of things. Though we do all agree that they can be pretty tasty (most of the time) and everyone’s got a favourite. From colas to tantalising tropical mixes to citrus infusions. These drinks come in all sorts of variations and flavours. This also rings true in the world of video games.

So what caffeinated potentially loaded with sugar drinks do our favourite gangsters, space marines and wasteland wonders like to chug down?

Probably the most recognisable fictional drink in gaming is Nuka Cola. This atomic age beverage has most likely saved the lives of vault dwellers everywhere.

Running low on HP mid-fight? Pull up the Pip-Boy, select that bottle of Nuka Cola you stole 200 hours ago, crack that bad boy open, slurp in down in a matter of about 10 milliseconds and then return to the fight. Writing that out just made me wonder how the protagonist opens the bottles without an opener, maybe they have those twisty caps? Who knows?

Maybe you want something a little more adventurous? Then go for one of Nuka Cola’s various varieties. Does Nuka Cherry tickle the taste buds? Or is a bright blue Nuka Cola Quantum more your style?

Which other drink has a whole theme park based around it? Nuka World featured heavily in one of Fallout 4’s expansions.

Perhaps your love for this fictional drink goes beyond fiction and into our very existence. The aforementioned Nuka Cola Quantum was made into a real drink you could buy in a real shop. If you could find one, that is, or you purchased one of off eBay for more than the person selling the drink paid for it.

I’m sure if you can look past the whole pre-war age of Nuka Cola then it probably tastes great. The fizziness might have gone unless some advancements in bottle efficacy happened in the Fallout universe. And you get a cap, which you can take right down to Diamond City or put on the line in New Vegas.

The 3rd Street Saints sure did come far. Street hustling in the first game and mega celebs in the third. And with this newfound fame came a Saints branded energy drink named “Saints Flow”

One sip of this Taurine infused pick-me-up gave Saints member Pierce the power of martial arts and Ryu-like Hadouken abilities. Which Pierce used to kick ass and slam home a dunk on the court. This is if you believe the Saints Flow ad.

Saints Flow returned in quite literally a bigger way in Saints Row IV. A very large menacing Saints Flow mascot attempts to take out the boss of The Saints (the player) along with the help of an army of regular-sized mascots. Somehow this probably isn’t the wackiest part of Saints Row IV.

A drink that goes above being just a drink. A drink that you’ll be under when it crushes you. Not only is Sunset Overdrive criminally underrated, but it also features a fictional drink. One which plays a vital role in the game’s story.

The drink in question goes by the name of “OverCharge”. It’s another energy drink but when this one is consumed it turns the drinker into a mutant where the thirst for another can will leave you licking OverCharge up off of the pavement.

These mutants dubbed “OD” are prevalent throughout the game. Making great targets for players to shoot and blow up with a various assortment of weapons as they grind on past.

OverCharge made an appearance outside of Sunset Overdrive with an Xbox exclusive rocket trail in Rocket League. Which made your battle car splurge out OverCharge when boosting.

Real-life cans of Overcharge were also given out to promote the game. These didn’t seem to have the whole mutant side effect though. Kinda disappointing really. 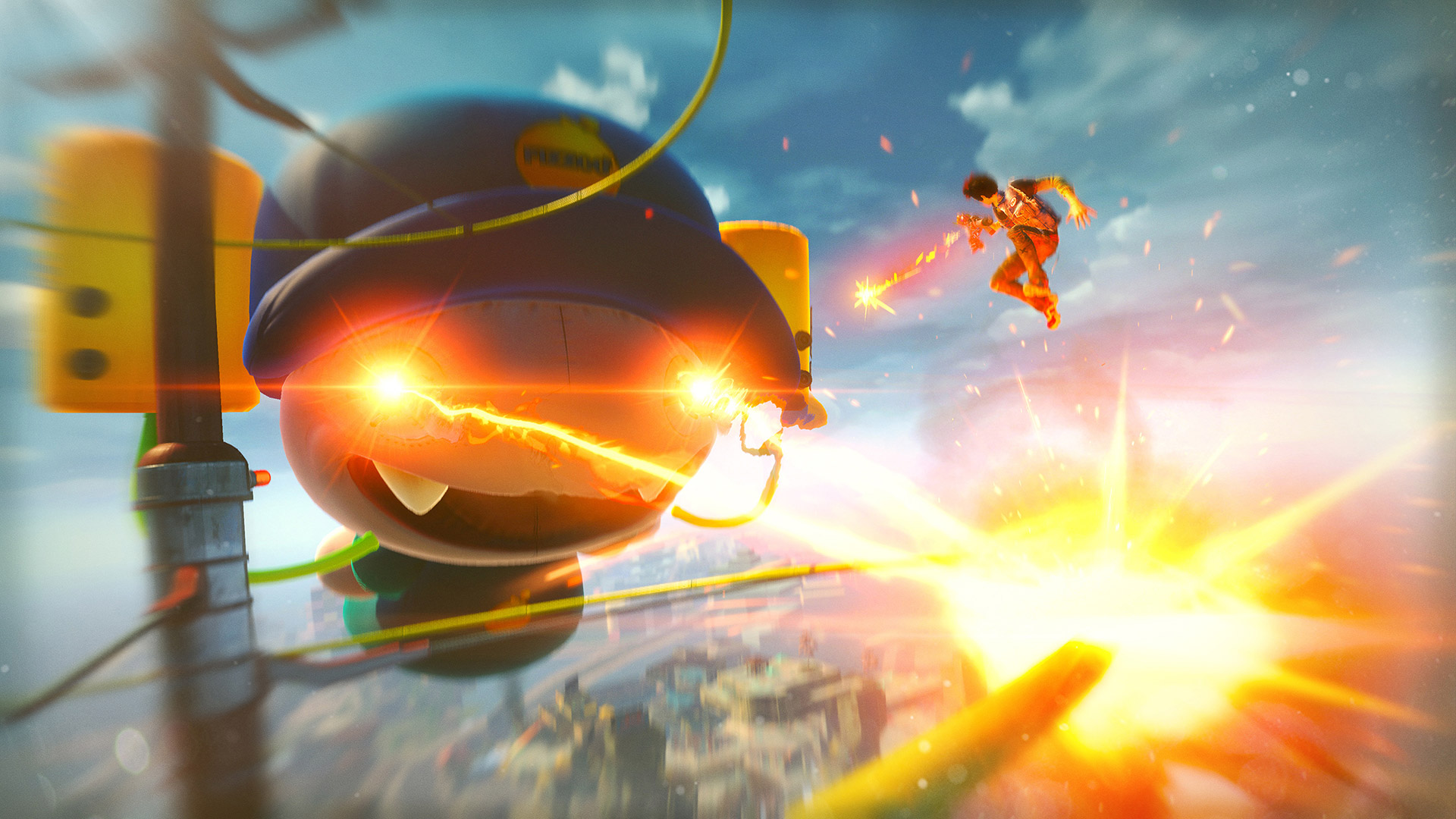 You’ve just been on a 5 (or 6 depending on which game) star rampage in Grand Theft Auto, you’ve been shot a bunch of times and run over by whoever you upset with your public antics involving an Uzi and an RPG.

You’ve managed to survive the urban warzone but are low on health. Don’t worry though as a quick trip to the nearest Sprunk vending machine will have you at top health in no time. All for the measly price of roughly $1 to $2.

Sprunk has made an appearance in quite a few GTA games now and has become quite iconic in the franchise. You can even rep your love for Sprunk in GTA by driving a car or riding a motorbike which is decorated in a Sprunk design.

Sprunk is a miracle cure in the world of GTA and I’m sure it washes down a greasy Cluckin Bell or rancid Burger Shot just fine.

A bit less known this one compared to the drinks that have already been covered. BLAST is a drink that features in the Halo universe. In Halo 2: Anniversary it’s supposedly an energy drink whereas in regular Halo 2 it doesn’t appear to be.

Its slogan in Anniversary is “Feel the burn”. And to be honest, a burn is the last thing I want to feel when indulging in an energy drink especially after reading the ingredients of them. Which sound more like a chemistry set that a safe for human consumption liquid.

This one makes the list not just because it is part of one of the best FPS franchises of all time, but because it has an Xbox achievement attached to it. If you shoot all of the BLAST cans hidden around multiplayer maps on Halo 2: Anniversary, you’ll be rewarded with the sweet taste of Gamerscore.

Fictional caffeinated beverages, in particular, energy drinks are more prevalent in video games than I initially thought. Thinking about it I can come up with some more drinks such as Beam Cola from Bully or eCola also from GTA.

On the less fictional side, Monster Energy is in quite a few games. Need for Speed 2015 and Death Stranding both have characters demolishing cans of the stuff. If we went the whole way and mentioned games where the Monster Energy name or logo appears in it, then you’ll need to down at least 50 cans of it to stay awake as we list them all, which would take a while.

Halo 4 Isn’t as Bad as You Remember