Falling Into the Final Fantasy 14 Hole, and Why You Should Try It

Having been a console player all my life, coming to Final Fantasy 14 has been a deeper experience than I could have ever imagined. Growing up on a diet of game series like Call of Duty, Monster Hunter and Fallout I would count myself as an average joe console main. The world of MMORPGs always had the slight taste of “Leeroy Jenkins” vibe about it, stat crunchy guilds and angry neckbeards fussing over “mounts“.

With FF14’s initially bad launch and MMOs just not being my thing, it fell off the radar for me.

Until, however, due to many factors that would need their own whole story, I like many other players dived in. And when I say many, I mean like going from around 1.5 million players in 2019 to currently having a daily player count of 3.3 million.

And I have no regrets whatsoever.

With the website MMO POPULATIONS giving it the 1st ranking of its top 20 busiest and most popular MMO games today. So, how come? What makes Final Fantasy 14 good?

God, the answer is so big, and varied.

For starters; the developers care deeply about their game and the players, it has a host of fun gameplay. And one hell of a community, very lovely, kind and warm to new players, which might be a contrast from some other large MMOs.

But what really drew me in, and I’m sure other players too, were all the black holes.

Little pockets of the world that draw you in and keep you there for hours, but not in a bad way. There is no “stay or you’ll miss out” feeling.

Work on your relic weapon for a small time, play a few games in the Gold Saucer arcade. There is no all-mighty hand above you pushing you to play more.

Have a coffee in the café……

The thing that has blown me away and put Final Fantasy online in my slot for best game ever has been coffee shops and nightclubs, not run by the game. Not run by people that work on the game. Rather, decorated, staffed, and run by players.

Players that make the world of the game feel so alive. As I write this, I am sitting in-game in the wonderfully cozy Café Catfish.

A beautifully decorated “guild” house or FC house (players can form a Free Company, like a guild), with the staff talking…. hold up, there is a wild west style showdown game happening.

There are sea-themed nick-nacks all around the walls to match the beach location of the Mist residential district that the Café Catfish sits within. Soothing music and the carefree chitchat from the staff create a soothing casual environment for all.

This is what makes Final Fantasy 14 so good – the gameplay is fun. Sure, the controls for the PS4 might be a bit janky when trying to interface with a game style normally designed for keyboard and mouse. But at the heart of it is the community and the pockets that pour such life and care into the world.

I got the opportunity to talk to some of the staff and ask them about their experience with the game and what made them stick with FF14. They both expressed that their FC and the friends that they played with were one of the main reasons that kept them playing. That the game had so many tools just to be sociable and the ability to make content for themselves in-between content patches. After vising other role play venues, they were inspired to start a more casual chill place.

For a solo console gamer like me, this was one of those strange, amazing, and kind of scary parts that I avoided at first. But after dipping my toe in, the desire to start a travel guide to Eorzea’s Light data centre is rising.

It’s so well worth it. Every week there is another seaming endless little pocket of content to binge on. If you haven’t already, I very highly suggest you give the free trial version a play. 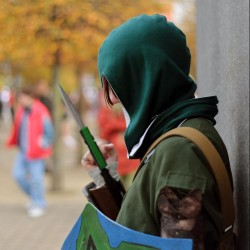 Tim Murphy
Hailing from a small sleepy market town this young adventurer set out to see the wonders of the big city, and has never looked back.

1 thought on “Falling Into the Final Fantasy 14 Hole, and Why You Should Try It”